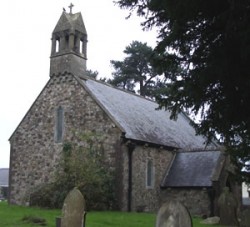 The Parish of Radyr came into existence soon after the Norman Conquest of Wales around the beginning of the 12th century. From the Norman period we have St. John the Baptist’s church and the Morganstown Motte. This earthwork suggests that for a short period during the Norman Conquest the boundary between Norman lands and those of the Welsh princes ran along the foot of Caerphilly Mountain.

The area had had a long history before the Conquest. Archaeological findings suggest that the Lesser Garth Cave (behind the Ty Nant Inn) was inhabited from the Stone Age onwards.

Place name evidence suggests that dark age princes might have had a residence at what is now the golf course. The sixteenth green covers what was once Maerdy Cottage and the “Maer”, whose house this would have been, was an official at the court of Welsh princes.

Lifris’ “Life of St Cadog” written in the 11th century, but referring back to the period around 530 AD, also mentions a villa or a “tref” called Aradur Hen. Lifris also tells the tale of Tylyway a hermit who lived on the banks of the Taff and Tylyway’s cell is the most likely origin of the name Radyr; from the Welsh yr adur, meaning the chantry.

The Mathew family of Radyr Court became involved in ironworking in the Tudor period. There is even a suggestion that cannon made in the Mathew foundry at Gwaelod y Garth, found their way onto the Spanish Armada.

Although the parish has been made up of twenty to thirty scattered farms since the Norman Conquest there have been five settlements:

Check the links in the box to the right, the photographs below, join the Local History Society, and check Wikipedia, which has more information in an article written by a local resident.