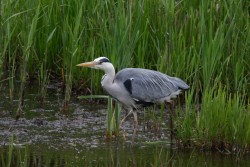 Heron at the Reserve

The Glamorgan Canal LNR and the Forest Farm Centre, together with the Taff Trail, are all to be found across the other side of the River Taff and accessed on foot, cycle and horse over the river bridge next to the station. In the Reserve itself are two bird hides overlooking two ranger managed weltand areas.

Tucked away near the M4 this 150 acre reserve is a haven for herons, kingfishers, woodpeckers, sparrowhawks, buzzards, coal tits, snipe and dragonflies – to name just a few.

A mulititude of bird species can be viewed from the bird hides and around the Reserve and have regularly included little grebes, moorhens, mallard, water rails, snipe, dippers (on the river), nuthatches, tree creepers, greater spotted and green woodpeckers, blue, great, coal and long-tailed tits, goldfinches, goldcrests, chaffinches, bramblings, bullfinches, whitethroats, buzzards, sparrowhawks, kestrels, reed buntings, reed warblers, song and mistle thrushes, grey and pied wagtails and redpolls. Less common but also seen here have been little egret, bittern, coot and even an American visitor – a spectacular male wood duck (or Carolina Wood Duck as it used to be named).

There’s a large range of dragonfly and damselfly species as well as many butterflies and moths.

Radyr Woods is an attractive area of ancient semi-natural wooded escarpment located on the southern edge of the village. It is managed by the Community Council and maintained by the Radyr Woods Wardens.

This woodland has been left in its natural state following the development of housing in the 1960’s. Woodpeckers, jays, owls and the occasional fox are seen here. Bluebells and wild garlic grow along the main path.