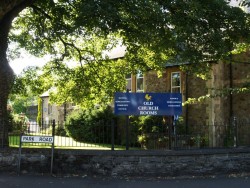 The Old Church Rooms were built in 1880 as the ‘National School’ (i.e. a school run by the established church) to a design by John Pritchard, the Diocesan Architect. They were the inspiration of the first resident incumbent in Radyr, the Rev H J Humphreys, who wished to establish an efficient Sunday School. Lady Mary Windsor-Clive gave the land and subscribed £300 on behalf of Lord Windsor. The Taff Vale Railway Company also gave £300. The eventual cost was £1100, the extra cost also being borne by Lord Windsor.

The Rev Humphreys only just saw the completion of the National School as he resigned the incumbency in 1880 on his appointment to the Rectory of Llangan.

On 20 September 1896 the National School became ‘The Mission Church’ and it was fully equipped for services by the installation of an altar, choir stalls and the three stained-glass windows in the apse.

When Christ Church opened in 1904, ‘The Mission Church’ ceased to be used for religious service and became known as ‘The Church Rooms’.

The building remained in the ownership of the Church until it was bought by the Community Council in 1988 with the aid of a mortgage provided by Cardiff City Council and was managed jointly with the Radyr & Morganstown Association up until 2019. It was extended in 1994 by the Community Council supported by grants from the Welsh Office and the Foundation for Sports and Arts. In 2000 the Garth Room was restored supported by grants from the Prince’s Trust and the Welsh Church Act Funds. The building was furtehr extended in 2016 to provide new toilets, large meeting room and a small kitchen facility.  It is now wholly owned and operated by the Radyr & Morganstown Council – please refer to their pages for further details.

The picture above shows the building from the outside. If anyone has any early pictures of the Old Church Rooms, particularly as it was when used as a church, the History Society would love to hear from you.