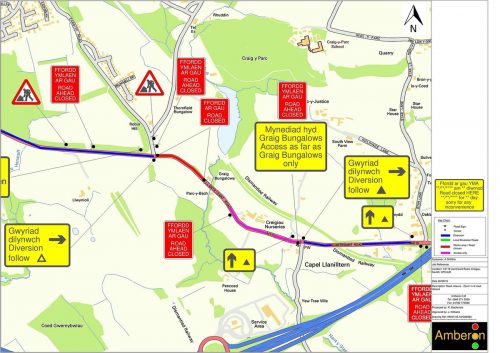 Here is the current information provided by Cardiff Council.

The Weight restrictions on Heol Isaf will remain in place.

Vital drainage works will be carried out on Llantrisant Road

Llantrisant Road – from the junction with Heol Isaf to Cardiff Road – will be closed in both directions from 9.30am on July 22nd for approximately three weeks, so vital drainage works can be carried out on the carriageway.

During the closure, the contractor will be carrying out work between 8am and 10pm from Monday to Saturday and from 9am until 10pm on Sundays.

The three week closure is the maximum amount of time that the road will have to close and if the work is completed earlier, residents, businesses and the general public will be notified in advance via an update press release. The work has been scheduled during the summer holiday, as research shows that after children break up from school, the traffic flow reduces significantly.

The Council has put plans in place to minimise disruption to residents and businesses.

The weight restriction on Heol Isaf will remain in place (except for the usual access arrangements).

Residents who live in the Rhydlafar Estate will also be given access in and out of their properties, enabling them to travel along Croft-Y-Gennau Road to get to the south of the city.

All emergency services have been notified about the closure and protocols will be put in place to ensure that these services can operate effectively.

All bus operators have also been informed about the closure and any amendments to any services which usually use this route will be clearly advertised on the bus operator’s website.

Access for both pedestrians and cyclists will be maintained throughout the road closure via a temporary bridge.

All electronic signs (VMS) will be used within the Cardiff and South Wales Trunk Road Agency (SWTRA) areas, so that advanced notice is given to all road users prior and during the road closure. A signposted diversion route will be in place. Those travelling north out of the city will be advised to travel along the A48 or use Heol Isaf to access the A470.

Those travelling into Cardiff will be advised to use the M4 motorway. All HGV traffic to current development sites will be diverted along the A48 from Western Avenue.