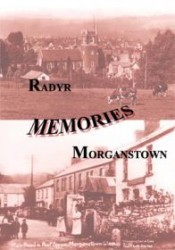 Originally published in 1993, this is the second volume dealing with the history of Radyr and Morganstown produced by the Local History Group.

Usually the names of contributors will be found in brackets at the end of each section, unless they have already been introduced in some other way. Further notes on the contributors can be found at the end. The text has been arranged under various headings in the hope of giving a clearer picture of the subject under review.

This book is now out of print, but a pdf file of it can be downloaded free of charge here.