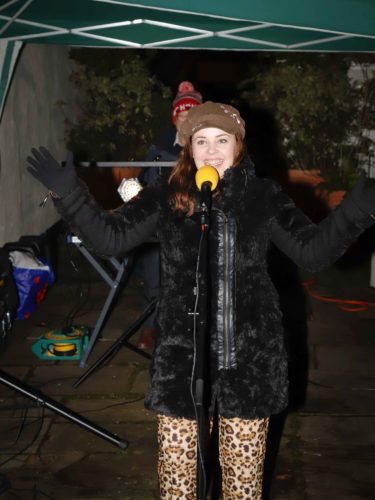 Sometimes you have to trust the professionals.  The morning of 6th December 2019 saw driving rain, but the weather forecasters said it would be dry by 5pm, which is when most of the set-up in Station Road was due to start.  As it was, even the professionals were not quite right, it was dry by 3pm but the organisers got very wet bringing all the gazebos, tables, BBQs, lights, etc on to the site.

Stallholders started arriving about 4.30pm and found the road had largely been cleared of parked cars by helpful members of Cardiff Council Highways Department.  Everything was set up in good time and people started buying burgers, drinking mulled wine and shopping at the stalls around 6pm.  The Christmas Tree lights in Morganstown and Lychgate Gardens were switched on at 5.45pm, accompanied by carols sung by local schools and the focus then shifted to the Christmas Tree in Windsor Gardens.  Primary School children sang carols in the adjacent Methodist church prior to moving across to Windsor Gardens where the tree was lit at 6.45pm to a great cheer.

At 7pm Leona Vaughan, Tenovus Patron and star of the CBBC television series ‘Wolfblood’, switched on the main lights in Station Road.  Santa appeared shortly afterwards to take up position in his glittering sleigh and was quickly surrounded by hoards of children.  One innovation this year was the introduction of a snow machine, which produced squeals of delight.  Sadly, plans to bring in a bouncy castle had to be cancelled due to the gusting wind but, as they say, ‘a great time was had by all’.  However, Mickey Mouse made a surprise appearance and gave great photo opportunities.

The stallholders all did well.  Charities raised money.  The police and St John’s Ambulance had nothing to do but smile.   It was a lovely atmosphere and a great way to start Christmas. 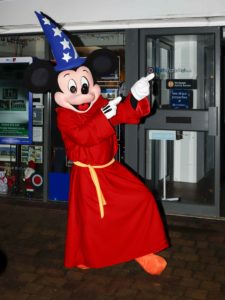 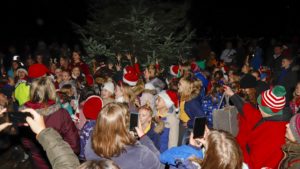 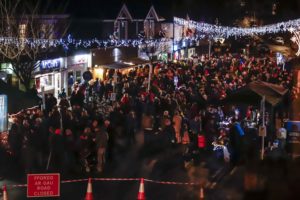