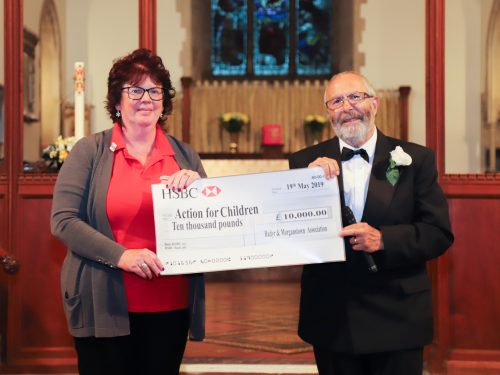 This year’s Festival was a great success. Besides the 34 events a large amount was raised for our charity of the year “Action for Children”. We have been working closely with them since last July and fundraising activities started at Christmas with retiring collections from both local Primary Schools. This continued throughout the Festival. At every event you will have seen people with buckets and raffle tickets. All the money raised through the raffle and collected in buckets goes directly to the charity.

All money raised has not yet been transferred to us as some events were held in the last few days and organisers were still working on their figures.  At the final Festival event, the charity concert for Action for Children, the Chair of the Festival committee, David Silver, presented a cheque for £10,000 to the charity, which was the sum of all contributions raised by the community so far. This will increase as more funds are received from Festival events. A final figure should be available in July when we hold our wrap up meeting of the Festival Committee to review this year’s Festival and start to plan next year’s Festival.